The theory and practice of Hoxhaism 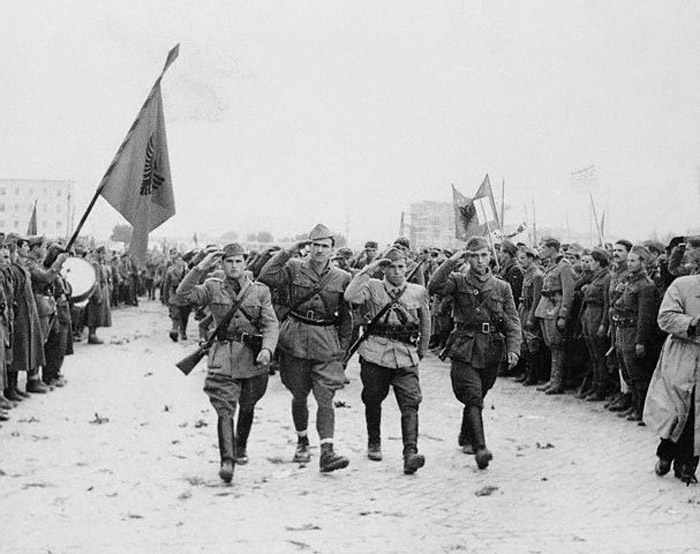 "The Theory and Practice of Revolution" is a famous editorial, published in the Albanian Communist newspaper Zeri i Popullit on July 7, 1977. The editorial was subsequently translated to several foreign languages by various pro-Albanian Communist groups. I have the unauthorized Swedish translation published in 1978 by "The Communist Unity Group of Stockholm" (SKEG), a forerunner of the KPS (see my review of Magnus Utvik's "Med Stalin som gud"). The American edition was apparently published by the Central Organization of U.S. Marxist-Leninists (COUSML). This group later broke with the "official" pro-Albanian world communist movement. I haven't seen the edition currently at sale here.

"The Theory and Practice of Revolution" was published during the Sino-Albanian split, when the Albanian Communist leadership around Enver Hoxha attacked the Chinese rapprochement with the United States and Yugoslavia. The editorial doesn't really say anything that was new at the time. Rather, it summarizes the erstwhile criticism of China made by Hoxha at the seventh congress of the Party of Labour of Albania in 1976. In 1978, Hoxha would publish what in effect became his magnum opus, "Imperialism and Revolution", in which he expounds at length on the ideological differences between the Albanian Communist regime and its erstwhile Chinese ally. This book, too, became near-canonical among the pro-Albanian Communist groups in different parts of the world.

Little needs to be said about "The Theory and Practice of Revolution", which I haven't already stated in my review of Hoxha's book. Zeri i Popullit has little problem proving that the Chinese adapt themselves politically to the Western powers, to various conservative and right-wing regimes in the "Third World", and that this has little in common with the ideas of Lenin. However, the Albanian Communists also run into serious problems of their own, something various Maoist groups were quick to point out. Thus, both Stalin and Mao had some of the politics Hoxha attacked. Yet, Hoxha never criticized them in his public speeches. In 1978, Hoxha did get around to attacking Mao in his book on imperialism, but Stalin was still upheld as a great Marxist-Leninist and friend of the Albanian people. In reality, of course, Stalin's diplomatic alliances were on a par with those of the Chinese. We're talking about the guy who signed the Hitler-Stalin pact, for crying out loud!

Hoxha's Maoist critics also pointed out the *the Albanian Communists themselves* had pursued many of the politics Hoxha now suddenly claimed were anti-Leninist, including peasant-based guerrilla warfare and "national democratic revolution" as a prolonged stage. I think it's pretty obvious that Hoxha was full of it, and that his break with China had more to do with local Balkan power politics than with some terribly important Marxist-Leninist doctrine. Hoxha presumably didn't fancy the idea of a Western-Chinese-Yugoslav alliance, Tito's Yugoslavia being the usual nemesis of Albania on the Balkan peninsula.

Another ridiculous contradiction concerns Hoxha's idea that the post-Stalin Soviet Union was "state capitalist" and "imperialist". This notion, it should be recalled, was stolen from the Chinese. (How could a "revisionist" like Mao correctly divine the character of the Soviet Union?) Apparently, post-Mao China was also "state capitalist". If the two major socialist countries had turned capitalist, Hoxha should logically draw the conclusion that the counter-revolution has been victorious on a global scale. Yet, he draws the *opposite* conclusion: the proletarian revolution is on the agenda in every nation of the world, including backwaters like Zaire! He also claims that a socialist camp still exists. It consists of "the Socialist People's Republic of Albania and other countries building true socialism". No other country is specified, but it was a public secret that the Albanian regime had good relations with China's Communist competitor Vietnam. Is Vietnam building true socialism? If so, what on earth is the difference between Vietnam and, say, Cuba or Angola, two Communist regimes Hoxha opposed? And how does Hoxha explain Vietnam's good relation with the "state capitalist" and "imperialist" Soviet Union?

Of course, he doesn't. The American publishers of this pamphlet, the COUSML (later the MLP), must have spotted these contradictions in the Albanian creed, forcing them to break their "fraternal relations" with the Party of Labour of Albania. However, they still insisted that Albania was somehow socialist, creating problems for themselves in 1991, when socialist Albania collapsed in pretty much the same manner as the "state capitalist" and "imperialist" Soviet bloc... Only the pesky Chinese, who both Hoxha and the MLP loved to hate, are still going strong! But that, as they say, is another story entirely.