The revolution has been cancelled 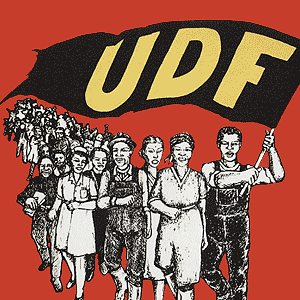 This is a classical issue of New International, the theoretical magazine of the U.S. Socialist Workers' Party and its co-thinkers around the world. First published in 1985, it marked another step in the SWP's break with Trotskyism and the Fourth International. The main article, "The Coming Revolution in South Africa", was written by SWP National Secretary Jack Barnes. The journal also includes an article by ANC leader Oliver Tambo, two speeches by Fidel Castro on southern Africa, and an additional SWP article about the region.

At the time, many supporters of the Fourth International (including, presumably, in South Africa) were highly critical of the ANC and the Congress Alliance, instead calling for the formation of a socialist or socialistic "Workers' Party" based on the Black African trade unions. Trotskyist groups outside the Fourth International were even more opposed to the ANC, sometimes supporting the PAC or the AZAPO. One group tried to join the ANC with the purpose of challenging its leadership. The Trotskyist perspective was based on the notion of that only an immediate socialist revolution could abolish apartheid and bring social justice to the poor Blacks. The ANC were seen as capitalist, bourgeois and/or insufficiently Black nationalist. Many Trotskyists were also suspicious of the role played by the "Stalinist" South African Communist Party inside the Congress Alliance and the ANC.

By contrast, Jack Barnes and the Socialist Workers' Party took a strong stance in the ANC's favour. Barnes had already repudiated Trotsky's strategy of "permanent revolution" in favour of a more flexible approach. In "The Coming Revolution in South Africa", he explicitly supports a revolution in two stages, a perspective usually associated with "Stalinism". While seeing ANC as a genuine revolutionary leadership, Barnes doesn't deny that the Freedom Charter (the ANC's program) is "bourgeois-democratic" rather than socialist. However, the SWP leader regards this as the correct strategy. The warped form capitalist development has taken in South Africa due to apartheid, makes necessary a revolution in two stages, where the first stage is the abolition of apartheid and a Homestead Act to solve the land issue and create normal *capitalist* relations. Barnes does seem to support the nationalization of banks and large corporations (presumably Anglo American, the notorious mining operator), but he doesn't regard this as an explicitly socialist measure. This is correct, at least from a Marxist viewpoint (witness Saudi Arabia, a capitalist nation with a state-owned oil company). Only in a later stage, whose advent cannot be predicted in advance, will it be possible to take the next step, from the bourgeois-democratic stage of the revolution, to its socialist stage. The ANC (and presumably the SACP!) are expected to lead the transformation all the way. The strong emphasis on the land issue and a Homesteading Act makes the reader wonder whether Barnes was thinking in terms of the post-Civil War Radical Reconstruction in the U.S. South, a "bourgeois revolution" by Marxist definitions.

Barnes strongly rejects the sectarian, anti-ANC perspective of the various Trotskyist groups, even waxing ironic about one of them (the Marxist Workers' Tendency). "Some things are the same the world over". Of course, to orthodox Trotskyists, Barnes' article was out-and-out "Stalinist" and "Menshevik", a bizarre restatement of the position Trotsky fought all his life. The Trotskyists predicted that the ANC would sell out the struggle against apartheid, and that no socialist transformation of South Africa would take place.

There is some truth in this. Rather than overthrowing apartheid by force, the ANC decided to negotiate with the apartheid regime, securing a peaceful transition (and even a coalition government with the National Party!) to a capitalism without homesteads, without state-owned mining companies, and without any ambition to move forward to socialism. The SWP tagged along, even publishing Nelson Mandela's conciliatory speeches in their newspaper The Militant, presumably hoping it was all just a clever tactic from the ANC's part. At some point along the line, the party must have realized that the ANC had indeed "sold out", and dropped South Africa from its list of favoured nations (Cuba and North Korea remains). In this sense, I suppose you could say that Barnes' sectarian opponents within and without the Fourth International were vindicated.

However, in another sense, the Trotskyists failed just as dismally as the SWP. The Trotskyist groups in South Africa are extremely small. Thus, the "Workers' List Party" only got 4,000 votes in the 1994 elections, compared to 12 million for the ANC! Still today, ANC remains the largest and most well-organized political force in South Africa. Besides, the ANC *did* abolish apartheid, a move considered impossible under capitalism by many Trotskyists, some of which still babble on about "neo-apartheid". They must have missed Lenin's distinction between national and economic self-determination, but who cares. I'm not a Marxist.

It seems the revolution in South Africa has been cancelled. For now. If another one is coming remains to be seen...