Before Hitler, there was Anton Drexler 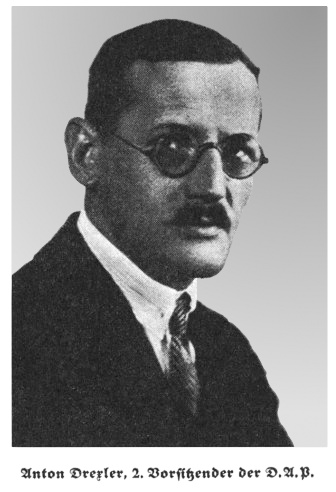 Anton Drexler, almost unknown today, was the “real” founder of the Nazi Party. In 1919, Drexler, Gottfried Feder and Dietrich Eckart formed the “German Workers' Party” (DAP) which was reorganized as the “National Socialist Workers' Party” (NSDAP) in 1920. Anton Drexler became its first chairman, and may have been instrumental in recruiting Adolf Hitler, but was soon pushed out by the latter. Drexler de facto left the Nazi Party in 1923, and didn't rejoin it until after Hitler's Machtübernahme in 1933. The Führer wasn't terribly impressed and it seems Drexler played only a minor role in party affairs until his death in 1942. Apparently, Drexler was also a member of the notorious Thule Society.

This pamphlet, “My Political Awakening” (third edition), is famous mostly because it's mentioned in Hitler's “Mein Kampf”. Drexler is a bad writer (although Hitler is arguably even worse) and the translation must have been made by Google Translate, since the sentences sometimes make no sense in any language. The translators have also chosen to retain the German spellings of names such as “Brest-Litowsk” (Brest-Litovsk in English) or “Trotzki” (Trotsky in English). The German word “Volk” is consistently translated “folk” even when it's clear from context that Drexler uses it in its non-Völkisch connotation. Thus, we are informed that Wilson stood for the self-determination of the folks, and we even learn of the Jewish folk (sic). It's “nation” or “people” of course.

The pamphlet is vaguely interesting, but hardly necessary reading. Drexler was a manual laborer or worker, and his political project was to fuse nationalism and socialism. He was apparently heavily harassed by the left-wing socialists for his efforts, but somehow managed to join a labor union anyhow. He also joined several conservative and militarist groups. Drexler (of course) supported Germany in World War I, blames the Jews for the defeat, etc. He is obsessed with the Freemasons, claiming they are Jewish-controlled. The character of Drexler's socialism is less clear than his nationalism and anti-Semitism. He is opposed to usury, hoarding, “Jewish finance” and free trade. The war should be won by attacking war profiteering, thereby winning the workers for the war effort. Drexler accuses the Bolsheviks of attacking the middle class, and calls for unity between workers, the petty bourgeoisie and the bourgeoisie. At one point, he calls for “Christian socialism”. The Thule Society isn't mentioned, and the only “occult” interest seems to be the constant attack on Masonry.

It's obviously pointless to criticize a founding Nazi for being a Nazi, so the two stars are for the bad quality of the translation.