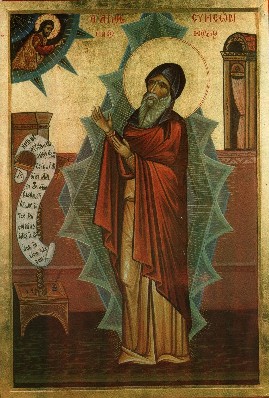 St Symeon the New Theologian (949-1022) was a controversial Orthodox monk and mystic in the Byzantine Empire. His life was almost coterminous with the reign of the famous (or perhaps infamous) emperor Basil II, known as the Bulgar-slayer to later generations. Today, St Symeon has been canonized by the Eastern Orthodox Church, but this development was by no means obvious during his lifetime. Indeed, Symeon was suspected of heresy and even banished for a period. Yes, he was supposedly a “Messalian”…

Hannah Hunt´s book is frankly boring, but it does give a good introduction to Symeon. Hunt doesn´t just discuss St Symeon´s mysticism, but also try to place him in proper historical and social context, both as regards Church history and more broadly within the Byzantine Empire of his time. Thus, we learn that Symeon was originally a court official, that he had substantial private wealth at his disposal even as a monk, and that monasteries in Byzantium were often politically oriented towards wealthy aristocratic patrons. The section on the role of monasticism within the Empire was interesting, especially since it showed that the stereotype of the Orthodox monk as a reclusive contemplative is just that (or perhaps an austere ideal seldom encountered in real life).

Symeon´s conflicts with Church officialdom were “all the usual ones”. As a strict ascetic, he naturally came into conflict with all the monks who had joined the monasteries for other reasons than the strictly spiritual. Indeed, many of Symeon´s monks actually rebelled against his authority and quite literally run away from the monastery! As a mystic with an intensely personal experience of God, Symeon de facto rejected Church officialdom, arguing that only people who had themselves seen God could possibly have authority, including the power to pardon sins. Symeon the New Theologian´s veneration of his spiritual father (teacher) Symeon the Studite (in the book referred to as Eulabes) was seen as highly aberrant by many in the Church. For starters, Eulabes was still alive when Symeon started to treat him as a saint! The mystic´s main opponent was the rationalist theologian Stephen the Synkellos, who had the ear of Emperor Basil II himself.

If this sounds suspiciously similar to the conflicts between Gregory Palamas and Barlaam the Calabrian 400 years later, well, that´s because the conflict *was* similar. Indeed, St Symeon the New Theologian is considered a forerunner to hesychasm, or perhaps even as an early hesychast himself. And yes, the hesychasts too were inevitably accused of the dread heresy of Messalianism!

Four stars, but be warned that this is a rather dry scholarly treatise (although perfectly understandable) of an almost Synkellite quality.